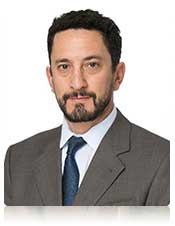 Mr. Katz was born and raised in Los Angeles, California and earned his undergraduate degree from the University of California at Berkeley where he majored in history. After working for a music publisher, a small law firm, and Greenpeace, Mr. Katz decided to pursue a law degree, moved to Colorado and enrolled in the University of Colorado, Boulder School of Law.

During his time in Law School, Mr. Katz interned in the Legal Aid Clinic, served as President of the Class of 1995 and served as President of the Public Interest Student Association. During his second year of law school, Mr. Katz studied at the University of Belgrano in Buenos Aries, Argentina. While in Argentina, Mr. Katz learned from those who suffered during the government led “Dirty War” about what can happen to ordinary people when the government and police have unchecked power. The combination of studies in Berkeley and Buenos Aires led Mr. Katz to pursue a career helping people protect themselves from the government and law enforcement.

Following his graduation from law school, Mr. Katz began his career with the Colorado State Public Defender. During his 22 years as a PD, Mr. Katz handled a wide variety of cases including Homicide, Sexual Assault, Sexual Assault on Children, Kidnapping, Narcotics, Assault and Economic Crimes. While a PD, Mr. Katz honed his skills as a trial lawyer, taking well over 100 cases to verdict in jury and court trials.

While handling a full case load as a PD, Mr. Katz rose to the level of Senior Attorney in the Jefferson County Regional Office. As Senior Attorney, Mr. Katz’ responsibilities included training and supervising new attorneys, being a member of the Jefferson County Recovery Court, handling complex cases involving Insanity Defenses, and negotiating with the District Attorney to help clients avoid the death penalty.

After his successful career as a Public Defender, Mr. Katz was happy to join the Law Offices of Decker and Jones in August of 2017. As a member of the firm, Mr. Katz is now able to focus his energies on the uniquely individual needs of his clients and their cases.